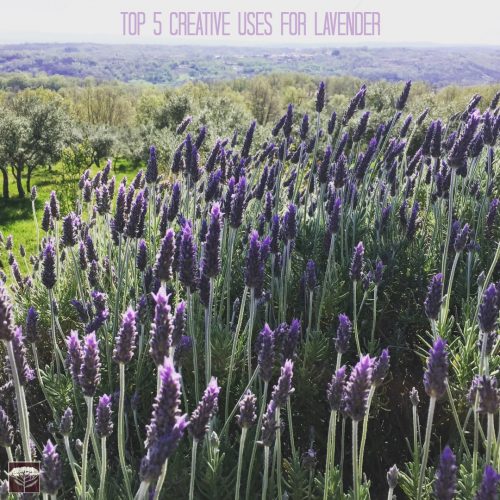 Lavender is one of the best know herbal allies! Learn how to grow this plant medicine plus 5 creative ways to use lavender.

Ah, Lavender – quite possibly one of the most well-known herbs in the herbal materia medica. This plant has a long history of as an herbal remedy for calming and is commonly used as an anxiolytic (anti-anxiety) today.

From teas, to baths, to essential oils – lavender’s aromatic and medicinal uses are common, and for good reason. The gentle medicine of lavender connects to our physical and spiritual bodies in such harmony that we find it being one of the strongest and safest tonic plants out there today.

And the great news is, you can grow it yourself!

We’re proponents of growing your own medicine, especially this medicine. This plant is so useful (and beautiful) that growing it your own garden allows you to make sure that it’s always there when you need it. Plus, it’s a great pollinator plant in the summer time (honeybees love it too!).

It’s worth noting that the lavender we typically see and talk about as medicine is Lavandula angustifolia. That’s what we’re going to talk about growing here.

Luckily, this is one of the hardiest types of lavender, so if you live somewhere that gets cold, you can keep your plant growing in the garden all year. That being said, if your lavender is growing in a pot, bring her in if it going to freeze for an extended period. A little frost here and there is okay. She can live well in the garden year-around but a pot that is above the ground doesn’t insulate roots from the extended cold very well.

For the most part, they just need to sit some place that gets a fair amount of sun. Really though, the more sunshine they get, the better they fair.

Lavender, like a lot of our herbal friends, really doesn’t like to have wet feet. As long as she has well-draining soil, and doesn’t sit in sludge, she’s not too picky about water. Actually, don’t worry too much about under watering, she could easily be considered a drought tolerant plant!

Pruning lavender is important for the health and the beauty of the plant.

You should shoot for at least two really good pruning sessions per year. Once at the first flower, and then against in late August, just before the fall season sets in. Make sure there are still some warm days left in the year when you prune the second time. Pruning it too late in the year could be detrimental to your plant friend!

When we talk about pruning, we aren’t talking about just harvesting the flowers or dead heading your lavender plants. Though this will encourage it to flower more often.

Make sure you cut the foliage back to one to two inches from the woody stems. Don’t cut the woody parts of your lavender plant mound. These won’t regrow and cutting their woody bits can hurt the plant.

Remember to shape your plant as you prune it. If you decide to let it free flow grow, your lavender plant will get leggy and it won’t produce flowers as well as a manicured plant. (Though it will still be gorgeous.) If you want the big mounds that you see on French lavender fields that live a long time, you’ll want to prune the underside of the bush a just little bit shorter than the tops. This will let them round out as they grow, and they’ll produce more flowers over the years!

Now that you will have an abundance of lavender flowers from your garden, you’re going to find lots of new uses for it. Here are a few creative uses for lavender for you to explore!

1 – Use it as a remedy for stinging nettle stings

Did you know that the soothing and anti-inflammatory properties found in lavender can also be used to help soothe tingly hands after harvesting stinging nettles?

Infuse your flowers into a carrier oil (such as olive oil). Rub this generously onto your hands and arms, or wherever may be stung. Lavender’s affinity for the skin makes it a wonderful remedy for many afflictions, but this one happens to be one of our unique favorites!

2 – Lavender for bugs; hang it in your closet

As a plant in your garden, lavender is an effect method of integrative pest management (IPM). This beautiful plant is also thought to help repel common pests like moths. So, say goodbye to your mothballs and hang these flowers in your closet.

3 – A secret ingredient in the kitchen

Lavender may have a reputation of being a medicinal plant, but did you know that it can also be a great addition to many-a-dish?

Both the leaves and flowers of lavender can be used culinarily, and can be lovely added to sweets, treats, and even as a floral component in rubs and salts. One of our favorites? Add a little pinch of lavender flowers to your next batch of shortbread cookies!

A little goes a long way with lavender though, so be mindful to not add too much!

4 – Use for cats and dogs; as a way to help ward off fleas

Remember when we said lavender was thought to help ward away bugs? That includes fleas and mosquitos!

Due to its repellent nature, lavender is also commonly used to natural bug repellents not only for humans, but for pets as well. You can make your own using lavender powder or a spray. Always be mindful when using herbs with pets, and remember that essential oils are never advised for use with our furry friends!

Directions: add lavender flowers to the mason jar and cover with apple cider vinegar; let sit 2 weeks and strain. Once strained, add to a spray bottle and spritz away!

Best used as a repellent and not as a remedy for an already existing infestation of fleas!

Always be sure to heed caution when using new herbs with your pets, sample a small bit before using at a large.

Due to lavender’s resinous properties this aromatic plant infuses well into oils, making it a perfect herb for a homemade batch of scented perfume oil.

To make a lightly smelling infused oil simply cover a generous portion of dried lavender with your body oil of choice and let sit for 4 weeks.

Once strained, this softly smelling oil can then be applied as a sweet and gentle perfume that also doubles as a calming agent for a daily dose of calm, cool, and collected nerves.

What are your favorite uses for Lavender? Tell us in the comments!

Two Interesting Growing References for You