Using Plants to Connect to the Goddess: Artemis 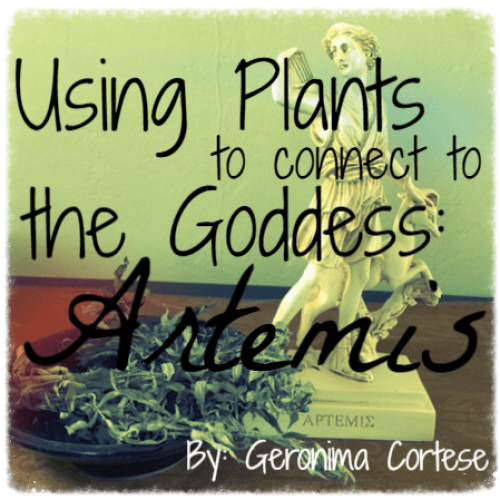 Connect with Artemis using plants. She is the Queen of the witches, goddess of the moon, the herbalist, the midwife, the hunter.

“… Artemis, the archer, roves over the mountains, along the ridges of lofty Taygetus or Erymanthus, joying in the pursuit of boars and swift deer, and with her sport the wood-nymphs, the daughters of Zeus who bears the aegis, and Leto is glad at heart–high above them all Artemis holds her head and brows, and easily may she be known, though all are fair…” Homer Odyssey 6.102

Using herbs to better your emotional and physical health is a time honored tradition that spans cultures and crosses countries.  What may not be as well-known, is the use of herbs to connect to the goddess on a deeper level.

This month we will begin with Artemis.  Even before she was born, Artemis overcame obstacles.  Her mother, Leto—daughter of the Titans Coeus and Phoebe, was prohibited from giving birth on any land by Hera, Zeus’ wife.  Hera was incensed that Zeus had a relationship with the beautiful Leto that resulted in twins Artemis and Apollo.  Leto finally found an island that was not attached to the ocean floor so it was not considered land and gave birth first to Artemis in what now is present day Ortygia, Sicily.  A day later, Leto crossed the strait into Delos, where Artemis helped her deliver Apollo1[i].

Artemis is known—in later incarnations—as Queen of the witches. She is the goddess of the moon, the herbalist, the midwife, the birthing woman, bringer of disease, death and the hunter. Artemis is an untamed wild woman who runs free with the deer, the hounds and the wolves. She is “Mother of all Creatures.” She is owned by no man, and thus she is “Forever Virgin.” And the plants named after her share her qualities[ii].

Though many plants are her allies, Artemisia are strongly associated with her.  Artemisia is one of the largest genera of the family Asteraceae family. It has about 600 taxa, present in all continents but Antarctica[iii]. Artemisia (known commonly as mugwort or cronewort) shimmers in the moonlight and like her goddess, is strong and resilient.  These perennials that are tolerant of drought, poor soil, and extremes of heat and cold.

Artemisia accompanies us to the realm of the metaphysical as she is strongly bound to the moon. To begin your relationship to Artemisia, start at the full moon.  Traditionally, Artemisia has been reaped on the full moon when the plant is photosynthesizing as night as well as during the day.  The moon energy is ripe and ready to be harvested into potent magical medicine.  Sit in the garden where she grows and first ask permission to harvest.  Once that is given, set an intention for her use; ask her as well.

For an offering to Artemis, take bundles of three stalks and bind the ends with a silver colored string. There is no “right-way” to do this, don’t worry about the technique, worry about the intention. It is important to wrap while the plant is still flexible to avoid the crumbling that occurs after drying. Artemisia can also be smoked inducing a trance state that helps ease into meditation with the goddess.

In addition to altar offerings, Artemisia can energetically clear space, ground and center through burning. This is an ecological alternative to the overharvested sage.  In late summer, her blooms and leaves can be dried and used as dream pillows to cross into the dream state.  As there is no guarantee that only good dreams will come, be clear as to what you would like to work on in this realm.  Another form of ritual practice involves the use of flower essence.  Artemisia flower essence helps to harmonize psychic potential within the soul, especially the ability to bring more consciousness and cohesion between one’s daytime awareness and the nighttime experiences of dreaming[iv]

Bathing is a goddess ritual of self-love.  Fresh or dried mugwort with Epsom salts can be added to a warm, relaxing bath surrounded by candles.  End with an oil of cypress, vanilla, and/or rosemary to anoint yourself into the temple of Artemis.

As you deepen your connection to Artemis, remember that there is no one way to honor the goddess.  She is in you and is yearning to be cultivated like the long, luscious Artemisia stalks that shine in the moonlight.

[i] The Myth of Artemis. http://www.ephesus.us/ephesus/mythology_of_artemis.htm

PrevPrevious PostYarrow
Next PostThe Alumni Series: What It’s About and How You Can Be FeaturedNext