Crest of the Sun: A Ritual for Summer Solstice 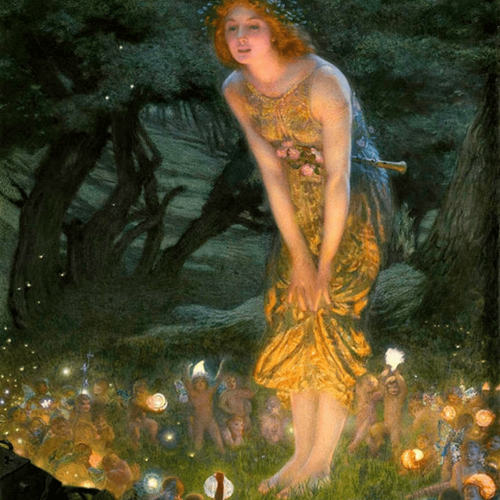 This Article was Written by Sami of Cinder Botanica

Jump to your Ritual for Summer Solstice

Bone and branch burning bright in the warm summer air. Alive with the sweet scent of wood smoke and Mugwort. The honeyed warm smell of hay fields ripening, luring people out into the night to the top of the hill where the bonfires burn.

As darkness encloses around the flames, flickering lights play tricks on the eyes. The wheat fields breath and sway as the Bilwis rides through the crops. Freshly shorn ewes are awoken as the dwarves sneak into the stables to pinch a bowl of milk. The soft whisper of an Elder pipe can be heard on the air, as the fey come out to dance with the field mice and fiery salamanders. Ripe with the warmth of the fire the Sun rises and climbs the sky lingering for a moment longer in the sky.

In the heart of the flames, one can catch a glimpse of what might come to be before being pulled by the hand to leap over the flames and join in the swirling dance of Midsummer.

The Folklore Behind Summer Solstice Rituals

For ancient people whose lives were woven into the seasonal shifts and patterns of nature, Midsummer was a point of great significance. On Midsummer, or as we know it, the summer solstice, the Sun reaches its highest point in the sky, resulting in the longest day of the year.

It seemed as though the Sun was standing still in the sky; a sure sign from the gods and spirits of earth and sky that normal reality had been halted and humans could participate in the world of the divine. The summer solstice was regarded as a time when the Sun god paused in the sky to oversee the earth goddess growing abundant with fruit, fields and flowers. The fairies, elves, and spirits of the land danced in a frenzied ecstasy, the grain devil prowled the crops and evil spirits lurked about causing mischief.

This pause in the regular flow of life, especially for those living in an agricultural cycle where work during the summer was long and difficult, allowed a moment for reflection, divination, and magic for the year to come. As well as a moment to join in the ecstatic joyful energy of the peak of summer.

Many of the folk traditions and beliefs at this time come from agricultural regions across Europe where ancient beliefs, customs and the ritual for summer solstice were preserved and hidden in plain sight through incorporating them into daily activities or preserving pieces within approved Christian religious activities.

The most prominent example is with the herb St. Johns Wort.

St. Johns Wort is an herb that typically blooms during June and often very near to Midsummer. The name of the herb as we know it comes from St. John whose day of birth falls on the summer solstice. The herb has long had an association with the solar energy and was known to posses the ability to protect against evils spirits, disease, and darkness.

This can be seen reflected in its ability to ward off seasonal depression, and its strong antiviral properties. For disease and depression seen through another lens are like evil spirits in the body and soul. The ritual of gathering St. Johns Wort on the summer solstice was believed to imbue the plant with exceptional protective qualities and it was kept in the house to ward off any evil spirits or diseases.

It should be noted that, taken internally, St. Johns Wort’s strong cleansing affect on the liver can interfere with many medications. But gathering it for a protective herb bundle, making a flower essence, or infusing it into oil is a safe way to work with its medicine and magic.

A Ritual for Summer Solstice: Making a Vibrational Essence

One simple way to engage with the numinous magic of this time of year that can be done wherever you find yourself is through making a vibrational essence of Midsummer.

This ritual for summer solstice can be done with as much or as little reverence as you like and should be something that brings joy. Much like making a flower essence you need water, and some kind of bowl or vessel.

Your vessel can be as simple as a mason jar, a special cup from your grandmother, a beautiful bowl that you got at a flea market or anything in-between.

On the eve of Midsummer take your bowl somewhere where it can sit undisturbed for the night and day. A backyard, porch, a sunny windowsill or out in a nearby field, hill or other area will do.

Fill your bowl with water, ideally spring water or water without chlorine, fluoride or other contaminates. If you can find St. Johns Wort or some other Sun loving herb it can be placed in your bowl. Making sure to give thanks and an offering to the plant.

Leave your bowl to sit in place for the full night and the following day allowing it to be sipped from by the fairies, reflect the moons glow, quench the thirst of a passing bee, and absorb the vitality and vibrations of the Midsummer sun.

On the following afternoon or evening gather your bowl and filter its contents into a jar or bottle. To preserve it add equal parts brandy and keep it in a cool dark place.

This essence can be used in moments where one wants to connect with the solar energy and liminal magic of summer.

Sami with Cinder Botanica. Sami is a clinician at our Community Herbal Center and uses bees, herbs, and a deep connections to the cycles of the planet in her regular herbal practice.