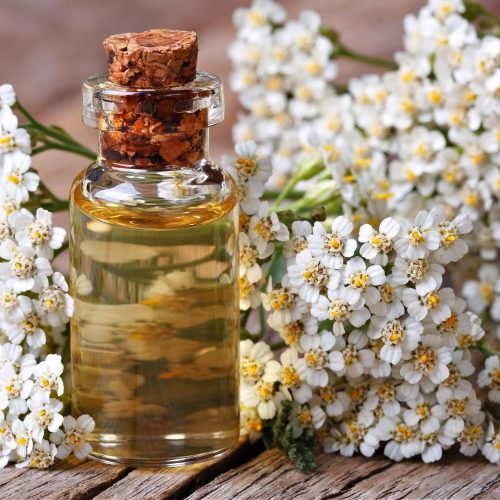 Oh Yarrow, Achillea millefolium – one of the most quintessential plants in any herbal materia medica. Often touted as “the only herb you need” and “no herbal first aid kit is complete without it.”

The herb of many faces, our yarrow is both a healer and a protector. While it’s clinical use is tried and true, the yarrow medicinal benefits extend far beyond the phytochemical realm. We look to his essence for strength, for guidance, and for creating a safe boundary to grow within.

Yarrow is named after the Greek hero Achilles, but the etymology is otherwise left to folklore. Some say when Achilles was dipped in the River Styx – everywhere but his heel –  it was laden with yarrow and the herb helped make him invincible. Others say that he used the plant to heal his soldiers in battle.

In any case, yarrow’s medicinal benefits are so profound they have been associated with the gods. That is something special, indeed.

For Cuts and Scrapes

Yarrow (Achillea millefolium) is most well-known as a first-aid plant and is commonly used for abrasions of the skin.

The leaves of yarrow are antiseptic, styptic, and antimicrobial in nature and are often used to help slow the flow of blood in minor cuts and scrapes. They simultaneously help to cleanse the area and help to protect it from further infection.

Of course, yarrow does not replace first-aid protocol, but the plant should not be overlooked as a trusty ally in the field or yard when cuts occur. Many a minor wound have been well cared for using a poultice or powder of the plant’s potent and medicinal leaves.

While the leaves of yarrow are well-known for their use as a styptic and antimicrobial, the flowers of the yarrow plant interact with the body in a much different way.

Her flowers have historically been used as a diaphoretic, or a sweat inducing agent, to help break a fever and promote perspiration when heat needs to be released from the body.

As a Bitter For Digestion

The intensely bitter flavor of yarrow can be used as a tonic stimulant for digestive juices.

Be aware though – this is one bitter plant! A little goes a long way, pointing to yet another one of the yarrow medicinal benefits.

A leaf or two can be chopped up and added to salad dressing, added to bitter extract blends, or taken as a regular tea to help support digestion. This is especially nice to add if you’re working with stagnation throughout the digestive system because yarrow can act as a tonic balancing blood herb.

The Magic of Yarrow

Here’s the thing, it’s not just the yarrow medicinal benefits we’re here for. This beautiful plant’s use can be dated all the way back to the Druids, who used him as a strewing herb. They sprinkled yarrow in doorways to help protect against the evils, and used the stems to tell the coming weather – which is a truly lost art.

Throughout all of history, from its naming, to the medicinal use, to the essence and magic, yarrow has been thought of as a very protective herb.

Growing and strewing yarrow brings protection to the home, and hanging the stem and flower over a new marriage bed helps to create a bond – a single unit – for a long and solid relationship.

The flower essence of yarrow is used to help people create better boundaries. (Which is interesting that it’s used to help unify a marriage, yes?)

This plant and its essence is often included in a formula to help a person protect their own energy, find their space, and set healthy boundaries.

Unlike some of the other boundary herbs, yarrow’s protection is gentle yet firm. It is a great plant to work with when one wants to set a gentle boundary with the outside world, while still allowing welcomed energies to pass through its veil.

A protector both energetically and physiologically, yarrow is one plant that any herbalist will want to include in their herbal apothecary and/or magical and essence kits!

How To Grow Yarrow

Yarrow is a perennial plant native to North America. It’s easy to grow and it can pretty much grow anywhere – so it’s naturalized around the world.

If you have a garden, or a place to put a little patio pot, consider growing yarrow for quick use around the house and in your formulas. While it’s often easy to find wildcrafting, it’s a border plant and it can be difficult to discern the safety of the soil it’s growing in.

This plant tolerates low levels of water very well, but the more water it gets, the larger its leaves will grow! It loves sun, but does tend to die back or have its growth stunted in extreme sun and heat.

For best results plant this hardy perennial in the late fall or early spring so that it gets plenty of water while it’s taking hold in its new home. This plant prefers consistent watering but doesn’t want its feet wet, and may benefit from partial sun in the hottest parts of the day.

The flowers of yarrow are really pretty and they attract pollinators! This makes a beautiful addition to the yard that not only supports other creatures in the ecosystem, but also gives you a solid first-aid plant as a part of your home medicine garden.

How will you use yarrow in your life? Let us know in the comments!